New Release From Legendary Jazz Bassist Scott LaFaro
Pieces of Jade is a collection of rare recordings from one of jazz's most revered bassists. The album includes five selections recorded in New York City during 1961 that showcase LaFaro with pianist Don Friedman and drummer Pete LaRoca and a practice session with Bill Evans. Available now on CD and MP3 from Resonance Records.

Besides reading every year a novel by James Ellroy i also read annualy a Michael Connelly. I stick to the Harry Bosch series. A few weeks ago i ended 'The Last Coyote'. Sometimes Harry Bosch reminds me of the the main characters James Ellroy uses. Harry Bosch is sometimes as unusual and onorthodox as an LAPD cop as is for instance Dwight C. Holly in 'Blood's A Rover'. But then it might seem as Harry Bosch has an ethical code which lacks the Ellroy main characters? At first glance i would say yes, then with 'Blood's A Rover' in mind i might have to reconcile my vision (don't want to give too much away for those who still have to read Blood's A Rover.

Dennis Lehane wrote an article for Il Corriere della Sera on April 30, 2009 which now has been posted to Michael Connelly's site. It deals with the new Harry Bosch novel called 'Nine Dragons'. I don't care in particular for the Dennis Lehane novels, but if he writes about a true master it might be interesting.

Speaking of Ellroy, i haven't read much reviews yet of 'Blood's A Rover'; if you found some online reviews please send me a message.
Geplaatst door Lexman op 3:02 PM No comments:

ROIO OF THE WEEK : Dave Liebman - Sketches Of Spain

This weeks ROIO is a recording i made from a live radio broadcast from the Jazz in Marciac festival in 2006. It's Dave Liebman with the orchestra of Toulouse playing ' Sketches of Spain'. The concert was supposed to be aired in its totality later on but it never happened or i missed it. I don'tknow if this concert is already in circulation...
Anyway, enjoy !

WKCR in New York will present its annual John Coltrane Birthday Broadcast tomorrow Wednesday, September 23d. The station will broadcast the music of Coltrane for 24 hours.You can listen at it here. Hopefully something unissued will show up ;-)
So sit back and relax ...

On September 17th Archie Shepp & Anthony Braxton were given an honorary doctorate by the University of Liège . After the academic audience a concert took place in the Salle Philharmonique de Liège where some of their compostions were played by multiple groups.
(source Jazzflits n° 124, year7)
Geplaatst door Lexman op 10:20 PM No comments:

The first in a series of concerts from Jazz in Marciac :the Ahmad Jamal trio in 2007.
Enjoy the music ! (links are in the comment section)

Any help with the setlist is much appreciated...

Here's a belated tribute to the late Rashied Ali, a webcast recording of his concert in 2007 at the Blue Note Festival in Gent, Belgium.
Thanks Rashied Ali for the wonderfull music (if it was only for 'Interstellar Space' and those duo's with Sonny Fortune) you gave us.
Enjoy! (links are at its usual place)

The French jazzmonthly Jazzman-Jazzmagazine (who have unified their forces) published this month an article on the last Miles period 1981 -1991. I haven't read it yet, but that might be something for the coming weekend.

Ayway they had around the cover of my issue a publicity for the new box which will be issued shortly "The Complete Columbia Album Collection". Here's the publicity shot : 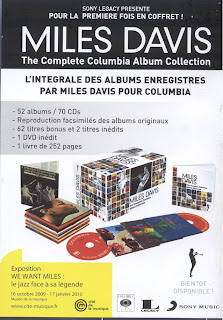 New Book : The Music and Life of Theodore "Fats" Navarro 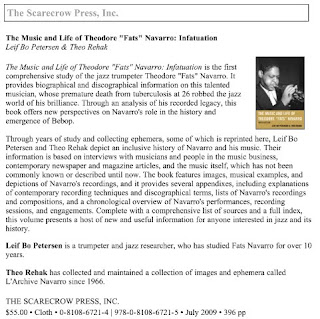 Here's the second installment of the ROIO of the week. This time a concert Sonny Rollins gave 5 days after his Berlin concert. All i know is that it was recorded during a Paris show but i don't have an exact venue. The audio quality, depsite the fact it's a radio broadcast, is not great (especially the first track) but what the hell, the recording is 35 years old...
Links are at the usual place., enjoy! 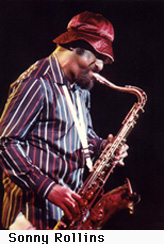 I received this message from the Jazzwestcoastlist this morning: