Herb Ellis passed away on the night of Saturday to Sunday, a message appeared on the West Coast-L stating :
“He died peacefully in his sleep. He put in a short appearance at last year's Sweet and Hot Festival in Los Angeles, in a wheelchair with a carer. He'd had Alzheimers for a while. »
There’s a Facebook group dedicated to  Herb Ellis here.
Geplaatst door Lexman op 10:29 PM 1 comment:

After a break of some weeks, here we go again. This time with the last in my serious of rare Gerry Mulligan recordings.

A rare 1955 recording of Glenn Gould has shown up and is even downloadable here. The concert took place on 4 or 5 december 1955 in Victoria. Enjoy!
Geplaatst door Lexman op 6:12 PM No comments:

My good friend Didier B. drew my attention to the fact that this evening France Musique will broadcast from 01.00 AM till 07.00 AM a special program on Lee Konitz. More info can be obtained here. Happy listening.
Geplaatst door Lexman op 10:00 AM No comments:

A very brief summary of the Bitches Brew panel at Austin's SXSW with amongst others : Ashley Kahn, Lenny White, Vince Wilburn can be read here.
Geplaatst door Lexman op 9:45 AM 1 comment:

Charlie Parker in the Guardian 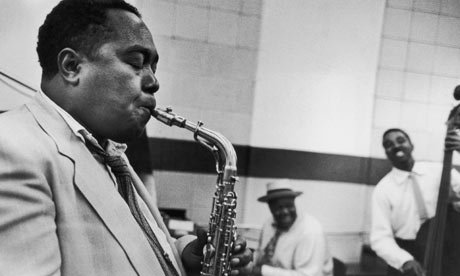 Sonny Rollins was live interviewed for On Point last wednesday. You can read more about here. I recorded the interview and made it available as an MP3 (320kb) here.
It's over 45 minutes and with Sonny Rollins, Bob Blumenthal is as well interviewed and questioned about Newk.
Enjoy!
Geplaatst door Lexman op 5:12 PM No comments:

Behind the Brel: The Story of a Musical Genius

A 3 part series on the life and times of Jacques Brel will be broadcasted on BBC Radio 2 as of this evening 23.30 London time.

Here's the introduction to this evenings first part :

Marc Almond invites Radio 2 listeners to explore the music and unconventional life of one of France's most revered singer-songwriters - Jacques Brel.
Largely unknown in the English speaking world (mainly due to him singing in French), Jacques Brel is considered one of the great songwriters of the 20th Century, whose lyrical content is poetically introspective and delivered with an honesty few could deny.
Tacking subjects such as love, death and social issues, Brel's music has been translated by artists such as David Bowie, Scott Walker, Shirley Bassey, Joan Baez, Barbra Streisand, Ray Charles, Frank Sinatra, Nina Simone, Dusty Springfield, Petula Clark, Rod McKuen, Terry Jacks, Nirvana and Vera Lynn.
Brel songs, which became major hits in the English-speaking world, include Ne Me Quitte Pas (If You Go Away), Seasons in the Sun, Jacky and Amsterdam. And in this three part series, Marc Almond will investigate why some Brel songs translated well and others didn't.
In the 1950s French society was heavily influenced by the philosophy espoused in Jean-Paul Sarte's Existentialism and Humanism and Marc will examine how this had a direct impact on Brel's songwriting and unconventional lifestyle.
Dubbed "the eternal adolescent" we will hear how Brel lived alone in Paris, despite having a wife and three children in his home town of Brussels, in order to preserve his "artistic inspiration". A man incapable of living a "pipe and slippers" life-style, we'll discover how his sense of freedom was so strong he attempted to circumnavigate the globe on a sail boat after sensationally quitting singing whilst at the peak of his career.
Contributors include Rod McKuen, who made If You Go Away famous; his daughter France Brel; Seasons In The Sun singer Terry Jacks; the Irish singer Gavin Friday; the French-Irish singer Camille O'Sullivan; Momus (aka singer Nick Currie); opera singer Toby Spence; Peter Straker; translator Paul Buck; singer-songwriter Robb Johnson, who released an album celebrating the work of Brel on his own record label; actress Elly Stone; and Jean-Michel Boris from the Paris Olympia, where Brel performed his last concert.
Geplaatst door Lexman op 7:51 PM 1 comment:

News on the Miles Biopic

Got this link from one of the music lists i'm on. To me the most tricky senctence is this one :

"Once is the script is OK’d by the family, then we go into production.”

That might take a while ....
Geplaatst door Lexman op 9:57 AM No comments:

Famous Jazzclub Montmartre Re-opens in May

Jazzclub Café Montmartre in Copenhagen re-opens in May! Below is a google translation of a Swedish article.

34 years ago packed "It Hemmelige Big Band" down their instruments and one of the world's most legendary jazz clubs closed. Now open the Café Montmartre again.

Jazz Pianist Niels Lan Doky lives alternately in Paris and New York. But now he's moving back to Copenhagen. A year ago, he discovered that the barber school at Great Rain Gade would move. Niels Lan Doky called his good friend Rune Bech, saying that "now we have a chance." They contacted the landlord and convinced him to break off negotiations with another tenant. They made him happy because he was a jazz lover.

The premises were the years 1954-1976 Café Montmartre. On May 1, resurrected jazz club.

At Café Zeze across the street sits Rune Bech and is studying a plan together with interior designer Peter Bundsgaard.

- It should not become a museum. But it will be a mixture between modern and nostalgic, "says Rune Bech.

The long, narrow wooden tables will be reproduced as well as the ten plaster masks that adorned the walls.

How it was at Montmartre for greatness time in the sixties, the author Dan Truèll described in a poem.

He writes about the semi-darkness, the dense smoke haze, that all wore sunglasses and island shirts, that everyone wanted to dance but it was so crowded that it was not possible without it had to be content with that swing along the benches.

- That was it. The club was an equally large attraction and as well known abroad as Christiania is today and it was Copenhagen to feel better, "says Rune Bech.

And Montmartre was a major contributing factor to many of jazz's biggest names settled in Copenhagen for good. Ben Webster and Dexter Gordon were two of them.

The new club would also attract international names. Game program for the first three months are clear but Rune Bech would not release the names yet.

- We want to mix the big names with the greatest talents that are not yet so famous. And there is plenty of talent. Jazz is great interest among young musicians, "he says.

Rune Bech is IT entrepreneur and former journalist. He is 43 years and never got a chance to go to the original Montmartre at Great Rain Gade. On the other hand, he was a frequent guest at Montmartre in 1976-1995 stood at Nørregade (last years disco). The Swedish musicians Ulf Wakenius, Lars Danielsson and Lars Jansson, are among his favorites.

Pianist Jan Johansson played in the house band at Great Rain Gade 1959th In an interview he said:

- Montmartre is simply a unique and wonderful place to play on. The American musicians not only play better here, but also different, more shades, more daring, weak and strong at the same time.

- To see great artists in a small, intimate room can not compare with seeing them in a concert hall, "says Rune Bech.

The club is 104 square meters and will have room for one hundred guests. The 60s were paired dishes half chicken with fries (SEK 5.50) and baked mussels with lemon and bread (3 £).

For the new menu is Elvio milleri, owner of the Michelin restaurant Era Ora. When he heard about the plans, he said immediately that he wanted to be. Montmartre was a second home to him when he came to Copenhagen in the seventies. Michelinmat the cafeteria prices, it should be served.

Era Ora-owners do not anticipate making money on the new Montmartre and others do not either. The activity will be driven by volunteers and sponsors. Such as the jazz-loving detergent importer who has already donated scouring for the next five years.
Geplaatst door Lexman op 10:06 AM No comments:

Email ThisBlogThis!Share to TwitterShare to FacebookShare to Pinterest
Labels: Montmartre

Howard Mandel wrote a lenghty article on the Coltrane - Dolphy collaboration called 'Anti-Jazz : The New Thing Revisited' and which can be read here.
Enjoy!
Geplaatst door Lexman op 8:30 AM No comments:

HBO will start its new WWII series tomorrow night. A lot of stuff is showing up and fan groups are everywhere like for instance on facebook or here where they also have a forum.
I'm still looking for a HQ recording of the 'Making of ' episode which was broadcasted last february. If anyone here around has it please contact me.
Thanks in advance.

Email ThisBlogThis!Share to TwitterShare to FacebookShare to Pinterest
Labels: HBO, The Pacific

THE EXOTIC RHYTHMS OF DON ELLIS
A DISSERTATION by SEAN P. FENLON
MAY 25, 2002

The MacDowell Colony, the nation's leading artist residency program, will present its 51st Edward MacDowell Medal to jazz composer and tenor saxophonist Sonny Rollins on Sunday, August 15. The MacDowell Medal has been awarded annually since 1960 to an individual who has made an outstanding contribution to his/her field, and this year marks the first time the Colony has recognized the field of jazz. Rollins joins an impressive list of past recipients, including Leonard Bernstein, Alice Munro, I.M. Pei, Merce Cunningham, and Georgia O'Keeffe.

Beginning at 12:15 pm, the award ceremony will take place on The MacDowell Colony grounds, which will be open to the public for the festivities and celebration. Robert MacNeil, chairman of The MacDowell Colony, will award the Medal, along with Cheryl Young, executive director. MacDowell Fellow and preeminent jazz writer and critic Gary Giddins, this year's presentation speaker, will introduce Rollins and describe his life and work to the audience.

"I'm proud and pleased to be selected to receive this very special prize," Rollins said. "Edward MacDowell's spirit engaged me many years ago when, as a child, I was inspired by his composition 'To a Wild Rose.' Later, I had the opportunity to make it a part of my repertoire, performing it on many occasions and eventually recording it. Somehow I feel I'm getting to meet him again."

In naming Rollins the 2010 Medalist, Giddins, also chairman of this year's Medalist Selection Committee, said, "Much as The MacDowell Colony represents to countless artists a matchless paradise for inspired, uninterrupted creativity, this year's Medalist represents the zenith of his art. Perhaps more than any other artist since World War II, Sonny Rollins has personified the fearless adventure, soul, wit, stubborn individuality, and relentless originality that is jazz at its finest. From the time he began recording, at 19, he was recognized as a major talent; his innovative approach to the tenor saxophone was endlessly copied, and his original compositions frequently adapted. But in jazz, composer and performer are often one and the same, and perhaps his key achievement has been the forging of an improvisational method that has given the idea of theme-and-variation

s a renewed vitality. His singular music is at once reassuring in its fortitude and daring in its detou rs. Incapable of faking emotion or settling for rote answers to the challenges of creating music in the moment, he keeps us ever-alert to the power of the present."
source
Geplaatst door Lexman op 3:25 PM No comments: